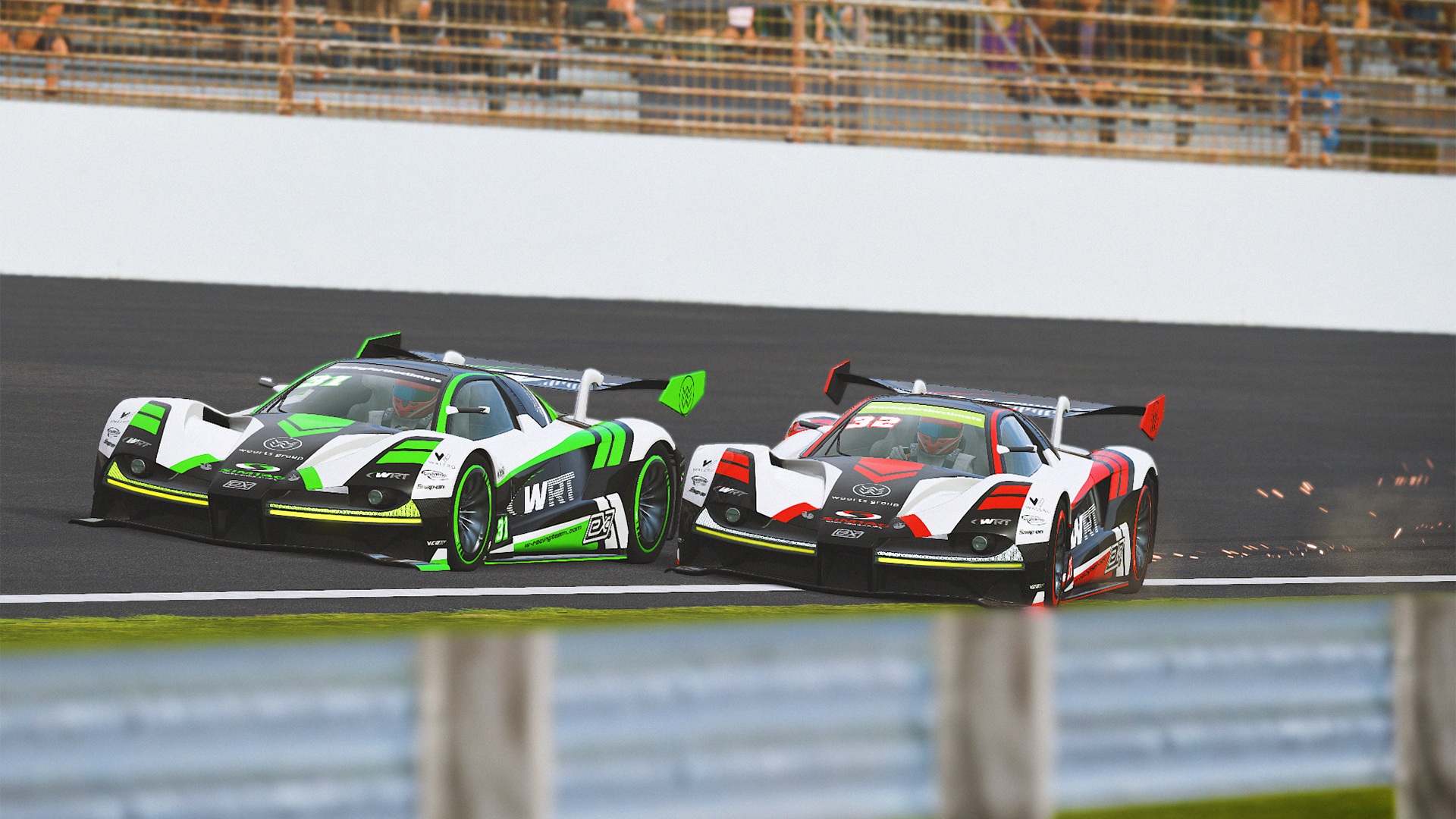 Overend became the first disabled driver to reach a Final in the World eX Championship. The Brit is only using his hands for racing – both in the real and the virtual world. He recently made history by winning the (real-world) Britcar Trophy Championship together with James Whitley. They became the first all-disabled team to win a national racing series.

“I’m really chuffed with how tonight went, thrilled to make the Super Final,” said Chris Overend after finishing just 0.013 seconds behind his teammate Devin Braune in a photo finish – the closest in the history of the World eX Championship beating the old record from the 2021 Maastricht eX Prix by 0.005 seconds.

Overend’s second place in the Indy eX Prix made sure that both WRT cars are now qualified for the Super Final at the Nürburgring-Nordschleife on December 20.

The disabled driver showed great speed on the oval right from the start. He qualified fourth as the fastest PRO racing driver and won Quarter Final 1 after an intense battle with almost every other car on the gird.

Overend dropped from P2 to the back of the field in the first lap of the Semi Final but was able to recover to fifth as the best-placed PRO racing driver and thus proceeding to the Final.

Devin Braune achieved his third pole position of the season on his very last lap in Qualifying using the slipstream of three cars in front of him to set the fastest time and reach almost 400 km/h on the start-finish straight.

The German was involved in a tense three-car battle for victory in the Quarter Final of the ESPORTS racers won by Jiri Toman despite rolling his ACER VERO R8G eX ZERO on the finish straight after contact with Braune.

Starting the Semi Final from row three of the grid, Braune quickly moved to the front, fighting for P1 with ACER VERO R8G’s Risto Kappet. They crossed the finish-line side-by-side separated by just 0.038 seconds.

Chris Overend passed Devin Braune on the first of the two laps of the final 2-lap shoot-out but could not keep his teammate behind going into Turn 3 on the final lap. The disabled driver tried to use the slipstream to regain the lead on the start-finish-straight but missed P1 by just a blink of an eye.

It was the third victory of the season for Devin Braune who achieved an impressive seventh consecutive podium in the World eX Championship. “What a day for WRT,” said Braune. “I believe today it was decisive that we both have great car control.” The 1,000 hp all-electric eX ZERO prototypes started to slide at highspeed in the four corners of the famous oval during the final laps.

MacDuff’s teammate Henry Drury showed a strong pace at Indy, finishing the Quarter Final of the PRO racing drivers in second place before crashing out of the Semi Final, also collecting NIANCO’s Thomas Schmid in the incident.

BS+COMPETITION endured a tough day. Beitske Visser was leading the Semi Final before being tapped into a spectacular crash by Jiri Toman. Visser’s Teammate Alen Terzic was eliminated in the Quarter Final after damaging his car at the start.

2021 World Champion Martin Stefanko from Williams Esports and TK9’s Lasse Sørensen were other surprising casualties of the Quarter Finals.

The German eX Prix at the Nürburgring on December 20 will be the final chance for Williams Esports, Absolute Racing, Patrick Long Esports and Biela Racing Team EURONICS to qualify for the Super Final on the Nordschleife which will take place right after the last regular round. Esports Team WRT, TK9 E-SPeeD, ACER VERO R8G, BS+COMPETITION and NIANCO Esports have all at least one car qualified for the World Championship decider.