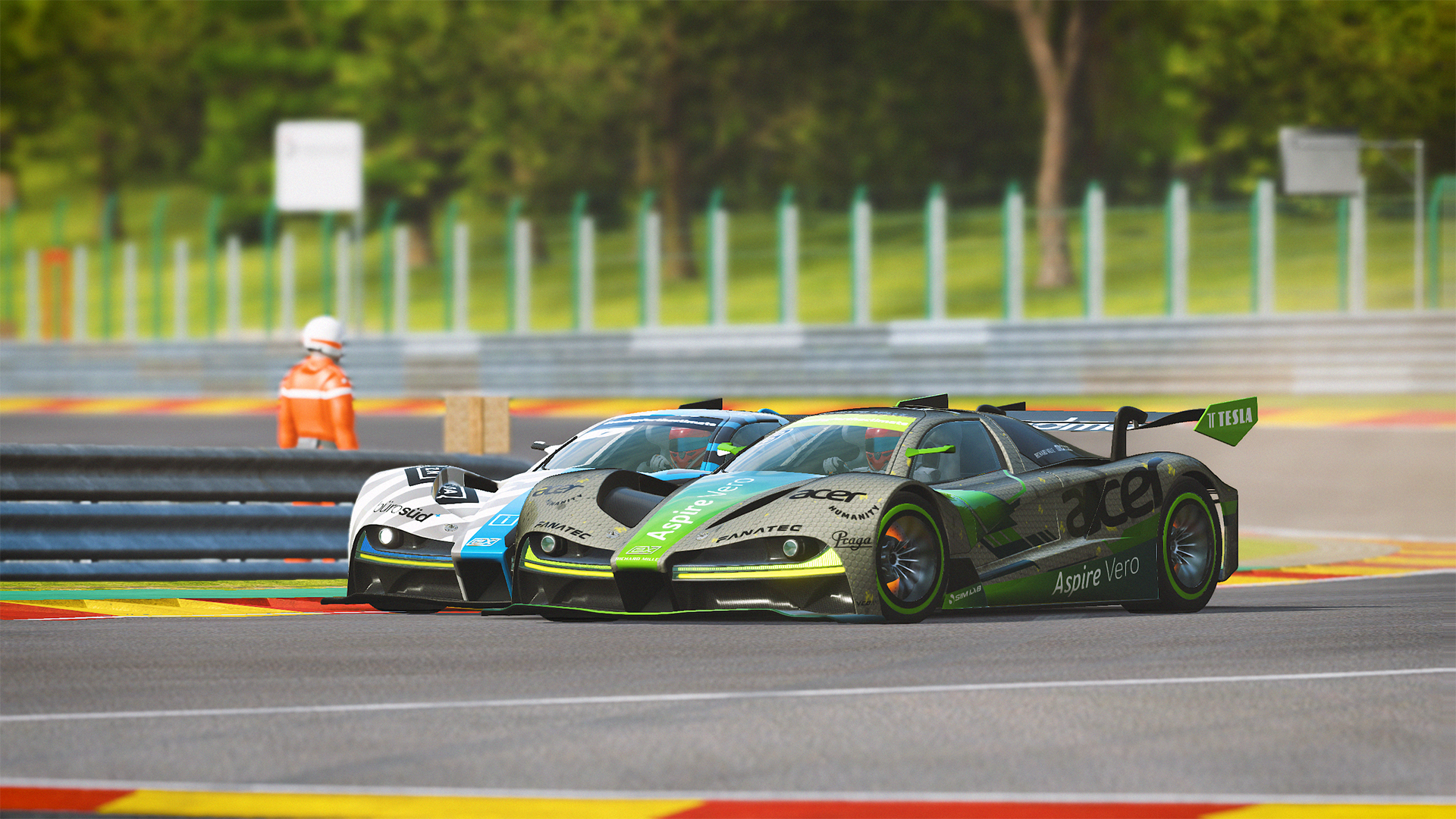 Pro racing driver Gordon Mutch from Scotland scored his maiden victory in the World eX Championship in a thrilling Belgian eX Prix at Spa-Francorchamps. It was the third victory of the season for Romain Grosjean’s esports racing team ACER VERO R8G and the fourth in total for the French outfit.

Gordon Mutch came close to winning the Maastricht eX Prix last season when he finished just 0.018 seconds behind Risto Kappet in the closest finish in the World eX history to date.

After a third place in the PRO racers’ Quarter Final, Mutch started the Semi

Final at Spa from row three. He took advantage of a contact between local hero Dries Vanthoor and Williams driver Will Tregutha ahead of him to finish the Semi Final as the best PRO racer and make it into the Final.

Yet again it was BS+COMPETITION’s Alen Terzic who had to settle for second overall. “If this was a competition at finishing second, I would be champion already,“ said Terzic who had led the Final from the start before Mutch used the advantage of the slipstream out of Eau Rouge to pass Terzic for good. The Slovenian attacked Mutch on the outside in the bus-stop chicane on the last lap but could not pass his rival.

“I’ve done a bit few of these World eX races,” said Mutch who will be racing at Spa in the real world next weekend. “I’ve had a few podiums but I’ve never managed to get a win. It’s nice to finally stand on the top step. Alen did it not make easy, but for sure made it fun. It’s a really exciting championship. It makes for some super close racing. These cars require a lot of skill to drive. They are so hard and super-fast. I think when you are seeing great racing, it’s a testimony of how well everyone is doing and how well the series is run.”

The Belgian eX Prix was presented by Esports Team WRT promoting the Drive Fast, Act Faster campaign. Dries Vanthoor drove a beautiful green art car for WRT and showed a strong pace. A small touch with Will Tregurtha in the Semi Final ended his hopes to make it into the Final.

WRT nevertheless scored a home podium at Spa courtesy of Devin Braune. The German was the fastest Qualifier and finished second in the ESPORTS Quarter Final following a fierce battle with Alen Terzic. Braune lost places in the frantic opening lap of the Semi Final before finishing third overall. It his fifth consecutive podium which allowed WRT’s No. 31 ESPORTS entry “Walter” to further extend its lead in the World eX Championship.

This was aided by a torrential day for TK9 E-SPeeD‘s Lasse Sørensen. The five-time eX Prix winner crashed in Qualifying, surprisingly finishing outside the top ten. The Dane quickly gained positions in the PRO racers’ Quarter Final before crashing out at high speed at Eau Rouge when he tried to avoid contact with Beitske Visser.

2021 World Champion Martin Stefanko just missed the podium on his return to the series finishing fourth just ahead of Beitske Visser. The female PRO racer completed another strong result for BS+COMPETITION in P5.

Will Tregurtha recovered to sixth after his clash with Dries Vanthoor. The Williams driver had won the Quarter Final of the PRO drivers.

Rafael Lobato was sixth for Absolute Racing while his teammate Yifei Li missed the Semi Final by just 1.093 seconds.

Thomas Schmid was the best NIANCO esports driver in seventh after Miklas Born crashed at Eau Rouge on lap one of Quarter Final 1 and was not able to repeat his performance from Sepang where he finished second.

Oskar Kristensen was ninth for TK9 E-SPeeD. The young Dane was involved in a spectacular four-car fight for P1 in the PRO Quarter Final.

It was a bad day for Patrick Long Esports and Biela Racing Team EURONICS as none of their cars qualified for the Semi Final. Biela Racing’s Nicolas Hillebrand at least grabbed some attention wearing a helmet and goggles from historic racing.

Round 7 of the World eX Championship is scheduled for October 25 on another iconic race track: Monza. The Italian eX Prix will be presented by NIANCO esports promoting the World Wide Fund For Nature.