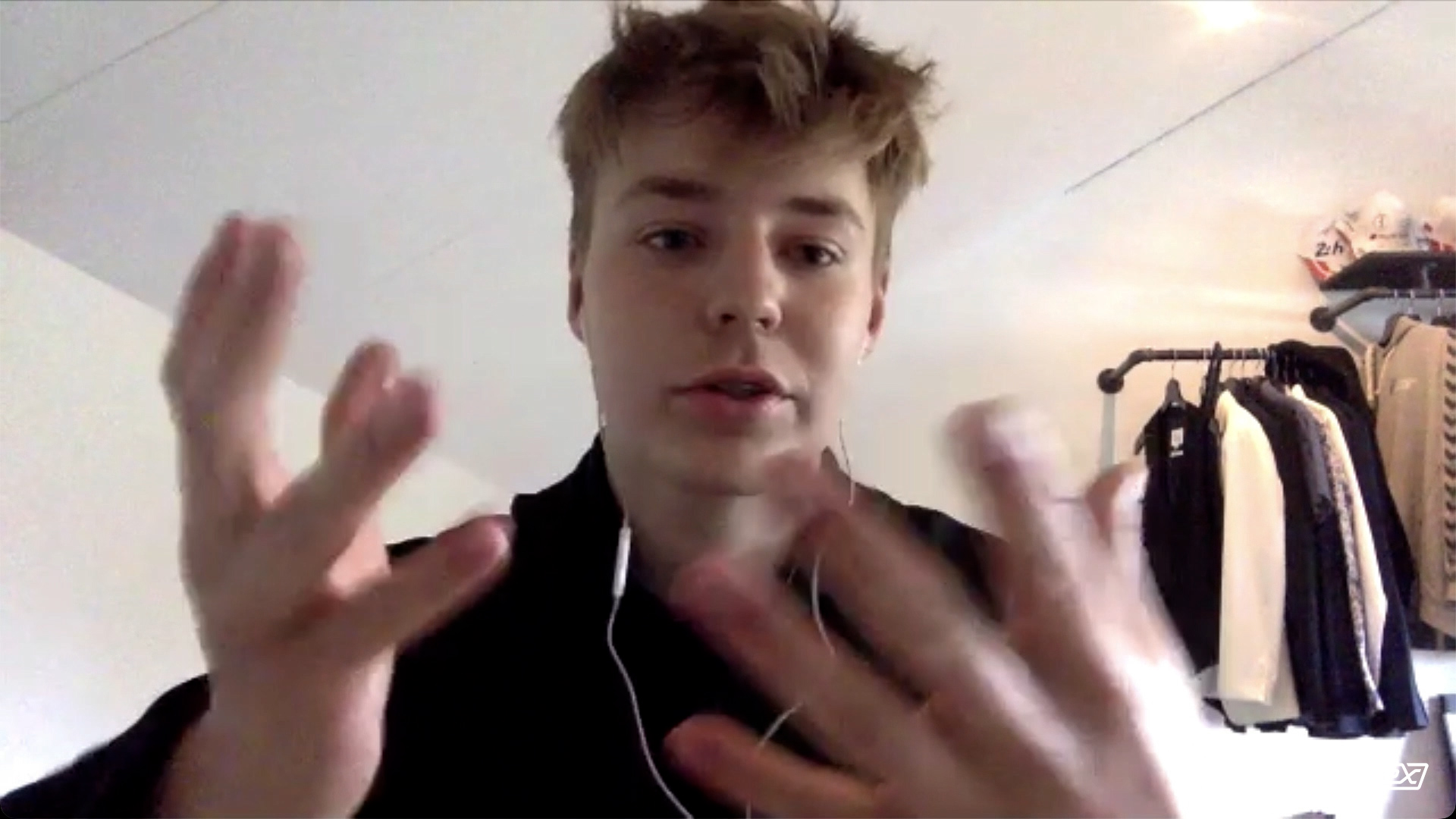 Denmark’s Oskar Kristensen turned 16 in January. He has already won back-to-back championship titles in the Nordic and Danish Karting Championships and is on the verge to become a pro racing driver. He has started racing “Little Viking” in World eX this year for TK9 E-SPeeD – the esports racing team of his famous uncle and 9-time Le Mans 24 Hour winner Tom Kristensen. And he is a perfect fit for #racingfortheclimate. Here is the interview with a stunning young personality before the French eX Prix at Le Mans (June 28, live on motorsport.tv).

Oskar, how did you get involved in motorsport? Was it because of your famous uncle?

He helped a bit, but mostly my dad – Tom’s little brother. He has been driving too. He has been two times amateur world champion. I can remember being all the time on the racetracks where my dad drove around in Denmark. My granddad also drove a lot – he was one of Europe’s best in Rallycross. So that’s family history.

A real motorsport family! And your aim, Oskar, is to become a professional racing driver as well?

Yes, my aim is to be able to live of racing cars, have income from that, and also be able to race all around the world.

Which category are you dreaming of? Are you heading to Formula One or like Tom into sports car racing or other series?

For me, it’s most important to be around a team that I have fun with. To be around in a car where I’m comfortable with everything. Le Mans could be really fun – having a teammate, being not the only one deciding what is going on. But also something like DTM where I’m the only one, just me and my machinery. I’m quite open, I’m going where the opportunity comes from.

Obviously, you are racing an electric car in World eX. The world is changing. Mobility is changing, a lot of electric racing series are coming. Are you following them like Formula E or eTCR?

Yes. I just saw a lot about the eTCR. We have just the normal TCR in Denmark, but I heard the commentators on Danish TV saying it’s maybe about five years the change is coming. Like in karting for example, where I’m driving Rotax. They have come up with an electric kart which is actually faster than our normal kart. The world is changing and I’m open to drive electric cars. It’s a good thing to keep the climate good.

Did you already have the chance to test the electric kart from Rotax?

Hopefully I will be testing it pretty soon. I want to try it out and see what it is like.

You turned 16 in January. Did it change anything?

Actually not. It’s not like in America where I get a license at 16 and all that. For us (in Denmark) it’s 15 when you get a lot more and you are like an adult, allowed to do more things – I’m allowed to buy alcohol, but it doesn’t change anything because I don’t drink. It’s just a number.

Are you already allowed to drive cars on the roads in Denmark at 16?
No, you have to be 18 (in our country) for that.

So, that’s still a while … How would you describe your relationship with your uncle, with Tom? Do you talk to him a lot? Do you see him often?

I think our relationship is like nephew and uncle. I never saw him as the famous Tom Kristensen. I just saw him as a casual uncle with who you can have fun and mess around. I can feel he is out a lot – before it was for racing, now for being a commentator or ambassador what he is doing around the world. I definitely feel it, but he is just a normal uncle for me.

How much did you follow his career? I think he stopped racing when you were pretty young.

I still remember some races, like the last two or three Le Mans (races) when I was actually at Le Mans. But most of what I know from his career is stories from him and my dad and people around just telling what he did. He is a great guy and I love being together with him. I’m glad we have this now with the World eX. I’m driving the races from his simulator. I can say hi to him and see him there.

How did you get involved in TK9 E-SPeeD?

I think I mentioned to my uncle that I was driving sim racing and I was getting better and better. He asked me if I would try out to see if I could keep up with the fast guys. Of course, (my teammate) Lasse (Sørensen) has helped a lot with how to drive it (the eX ZERO) and setup and so on. That has helped. I think I'm getting better and hopefully soon get in the Final (of an eX Prix).

Did you do any other esports championships or races before?

On the esports side I had been in a Formula 3 series. The result wasn’t that convincing because it was only half a season. So I was not able to get maximum points.

Do you have a sim at home, or do you need to travel to Tom all the time?

I have a simulator, but I’m getting a new computer because I can’t drive here with multiple cars without lagging. When I get the new computer, I will be driving from home also the races. So, it's just a precaution that I don't lag and crash into another car.

Do you think that esports racing is a good opportunity to practice for real racing?

Yeah, I definitely do! In cars, the winter break is very long. In karting it doesn't affect that much because you drive and practice almost around the year. But in cars it's a lot harder. The simulator gives you the opportunity to be ready for the first race. You are also racing close to other people and not making mistakes so easily. So, I think it's a great opportunity to get better or maintain what you already have accomplished.

And what is your impression of the eX ZERO? It's quite a beast, isn’t it?

It definitely is with a 1,000 horsepower. This is a lot! It’s hard to handle. Also the Daytona setup (created by the host team Patrick Long Esports) was a lot on the rear – that was definitely a game changer on how the car reacted. It was really fun to drive it, but quite hard at the start. But it is a good car and really fast when you master it.

For the next round at Le Mans, your team is in charge of the setup – will you be doing it or Lasse?

I think me and Lasse, we'll talk a little bit about it – but mostly him, because he is much more into it and into rFactor.

So maybe a good chance for you to have a good result at Le Mans?

I hope so because I was already driving a lot around at Le Mans with a Logitech wheel on the PlayStation and Gran Turismo when I was a kid – just driving laps and laps and laps. So, I can remember the track and I think it’s goona be good.

Have you ever been to Le Mans in real life?

Yes. My dad has a travel company. He is taking Danish guests to Le Mans. I think I’ve been there six times. Unfortunately, not this year. I had some tests to do in school and had to prepare.

We already talked a little bit about the climate crisis. The world is changing a little bit. Is this a topic in school as well and in your daily life?

Of course! We have small things in our home to try to make it better and we also talk about it in school. Actually, me and my buddy, we had a chemistry project for the final test of the school year. It’s about plastic. In some plastic it can dissolve to become nothing. In some plastic it just keeps as it is or go into microplastics. We made plastic to see if we can dissolve it and make it disappear. (Sustainability) is a big thing also in my life. It’s definitely going to change the way the world is looking, and we will see if there are other methods than just a normal gas.

If you could dream of an electric car, which one would you choose at the moment? The one Tom is driving right now, the Audi RS e-tron GT?

I think the Audi is a good car, but they need to get the battery up so you can drive longer before recharging. But yeah, it’s definitely a cool car. And it accelerates really fast.

I had the chance to test one recently as well. It's really a rocket … Last question: I read in your profile you are doing boxing as a hobby.

Yes. I have a local boxing gym centre where I've been training the last four, five years to keep my form up and get in great shape. I couldn’t train for two months (last winter) because in December I had a surgery. That did hurt. But I’m going there again. Boxing is quite hard. It’s fun to be there. If you aren’t in shape, you get hit.

So, no boxing on the racetrack please at Le Mans on June 28! Thank you very much – it was a nice talk to you, and we are looking forward to see how much progress you will be making in World eX.