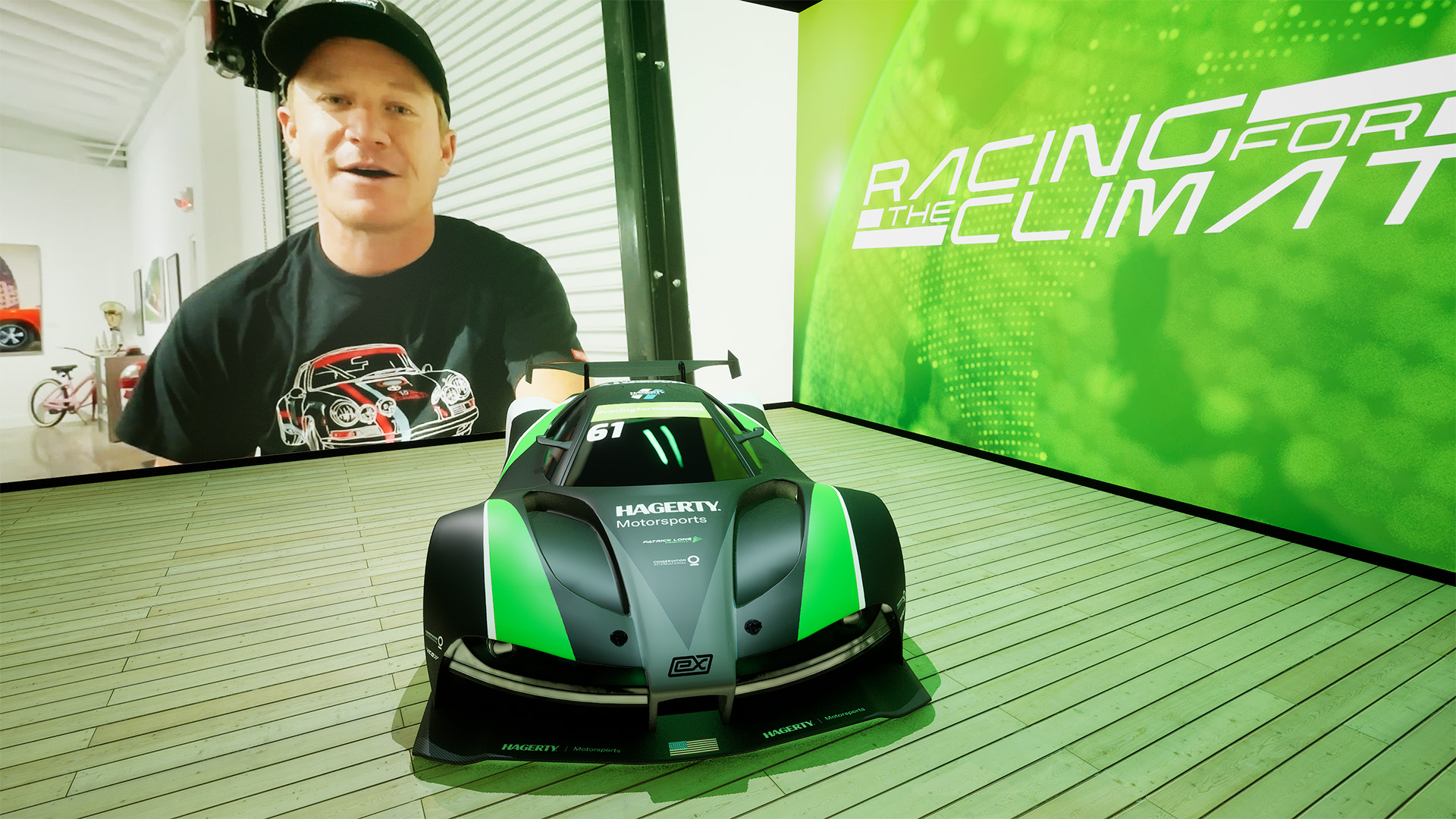 Interview before the HAGERTY US eX Prix at Daytona

20 years ago, Patrick Long and Mike Rockenfeller have been teammates in the UPS Porsche Junior Team. They’ve stayed in touch since then which eventually led to the foundation of Patrick Long Esports. The American outfit is the Host Team of the upcoming HAGERTY eX Prix of the USA at Daytona on March 31. We talked with Patrick Long about electric mobility, esports racing and his relationship with World eX co-founder Mike Rockenfeller.

‍Patrick, what is the status of electric mobility in California?

It’s great to see electric mobility progressing. Southern California is sort of a hotbed for electric vehicles. You see people lining up for the charge stations. We are certainly looking at the infrastructure and how to increase capacity. But the great news is, it’s plenty busy around town.

‍As a Porsche ambassador, did you ever have the chance to test the Porsche Taycan?

Yeah, I’m fortunate to have a Taycan as my daily driver and it’s a car that’s really grown on me. In the beginning, I didn’t know what to expect. I had done a few tests in the cars, but living with one and driving it daily, it’s so enjoyable. I mean, what you underestimate is how linear the power delivery is, how smooth, quiet, comfortable things are. And my kids love stopping and starting.

Yeah, absolutely. I become a big believer in it, even from a performance standpoint. The way that Porsche has placed the weight low and is always looking at handling. This is important as the 0 to 60 or performance numbers. The twisties are fun as well.

‍Since you stopped your career as a professional racing driver, what's your main business now?

“Luftgekühlt” is my personal business. We focus on experiential, air-cooled, all types of online and offline activities, trying to speak to not only the purists, but the first-timer and the new people interested in joining into the Porsche family. For a lot of youngsters, a 914 is a very affordable point of entry and we want to give them a domain to bring their cars out and meet other enthusiasts. Patrick Long Esports as well as being an ambassador for HAGERTY are high up on my list. I’ve got a new project coming online here in the next two months in Los Angeles with the HAGERTY people, that is brick and mortar and the first time that they’ll have a space to celebrate some activities. So plenty busy there. And also consulting for the CEO and Porsche Motorsport, North America as well as being an ambassador for Porsche Cars, North America with street car products. So, I have my hands in quite a few different things and more time on the weekends to be with family. But during the week it doesn’t seem like there are enough hours in the day.

‍You have started Patrick Long Esports last year entering World eX. What are you expecting from World X and your team this season?

It’s been an amazing and interesting eye-opener to have an esports team. Jeff Swoboda is the partner of mine in the company, and he’s a long-time friend and also a business associate. We’ve got some great young drivers who are hungry to push up into the final, but there is lots of competition from other teams. It’s great to see an international flair, a full-time media team broadcasting, and the series is growing. Looking forward to Daytona. We’ve got some guest drivers coming in and trying to make fun for everybody, especially here in the U.S.

‍You’ve nicknamed your cars ‘Liberty’ and ‘Shamrock’. What’s the meaning behind those names?

‘Liberty’ is speaking to the US survey and the Stars and Stripes, Statue of Liberty and a few different nods to the U.S. culture. ‘Shamrock’ comes from my Irish heritage and always having a green helmet with a shamrock on the front of it. So, it’s great to blend two different sort of cultures with inside the team and to march forward for the USA as the only team on the grid from the Americas.

‍Your main partner for the team is HAGERTY. You mentioned it earlier. What are they doing? And can you expand on that about the relationship with them?

HAGERTY is a driving brand. We look across all different platforms, both online and offline. For instance, I just came back from the California Mille, which was a week-long rally paying homage to what really started the Mille Miglia in Italy. To have a general license here in the U.S., for HAGERTY be the backer and the producer and the owner of that event is a way to preserve driving. I think HAGERTY looks at new and old automotive culture, and getting out, experiencing what there is to come. We’re planning the Monterey at the moment with the Car Week coming up in August. It’s Haggerty all over from top to bottom, the HAGERTY House. There are new events popping up. We’ll be doing riding-drives at the track leading into the race. It’s great to be part of the brand. It’s great to see how much growth they’ve had over the last 24 months. And with everything coming back online and lots of automotive events here in the U.S., it’s been fun and busy.

‍HAGERTY is also the presenting partner of US eX Prix at Daytona. What are your personal memories of Daytona? Bad ones, good ones?

Every year that you enter the 24 Hours of Daytona you know you have a chance of winning the famous Rolex watch. But you also know that there’s 60 other cars on the grid with multiple drivers in each entry that want that watch as well. So, it produces great battles. I’ve been fortunate enough to win the watch in the past, but I also had lots of let-downs and moments where we thought we had an overall win in our hands and it slipped through in the last final hours. But a great memory would be 2006. Mike Rockenfeller, myself and Lucas Luhr were driving the Alex Job Daytona Prototype, and we had a mechanical failure after being on pole position and leading many hours of the race overall. We battled back from eight laps down to get back onto the lead lap and we were fighting the Ganassi boys in the closing stages of the race and ended up on the podium. The days there, multiple-class racing, restarts on the infield – it’s  just an amazing track that produces close quarter racing.

‍How would you describe Daytona?

It's certainly a lot tighter than Le Mans. The same amount of cars, but quite a bit less racetrack. The high banks are the most memorable part, especially for the first-time drivers to go to Daytona. You underestimate just how tall the banking is. But to make speed at Daytona, it’s really about the late-brakers into Turn 2, the first hairpin, and getting off of the bus-stop chicane in the back straightaway for a run all the way up to start-finish.

‍Every World eX team is now connected to climate protection project, in your case Conservation International. How important is this message for you?

Each team raising awareness for different groups and studies is one great way to give back. When you look at motorsport and how it can create PR awareness and drive funds towards different charity groups, resource centres and people who are making a difference out there. There’s so many fans and avid enthusiasts of motorsport who are there for the competition, but it becomes such a great platform for messaging, and with that, doing something good with sport and competition.

‍Coming to Mike Rockefeller, the World eX co-founder. You have been teammates quite a long time ago. So, Patrick, now it’s time to tell some funny stories we maybe don’t know about Mike.

My first memories of meeting Mike is actually my try-out for the UPS junior Porsche team. I was the new guy. Mike was already in the team for one year with Mark Lieb, and Mark Lieb was moving on to the factory team. Joining the team at Leipzig for my first test, it was quite apparent how talented Mike was – and pretty open for a teammate. I was a bit older and had some more experience in single seaters, but I needed to learn what it was like to race in GT racing, and I remember battling quite hard with Mike and thinking this could get interesting after a year together. Although we had some moments where we were looking across each other before the race, I think generally we had a great working relationship and we pushed each other. Owen Hayes, our race engineer, was just a tremendous gift to both of us. To have somebody who had so much international experience in DTM and top-level prototype racing running our Porsche Cup cars and Supercup cars was such an interesting and insightful experience for us. The final race that we had in 2003 as juniors was heading to the US to join the America Le Mans series, the IMSA series in that era, and going into endurance sports car racing for the first time. Mike was probably in his teens. I was in my early twenties, and joining the grid with the likes of Kristensen and the gig dogs of the Audi program in an R8 and we in our GT3 R was a very-eye opening experience. I remember having a drink with Mike after the first day of practice and thinking to ourselves: this is way more than we anticipated. It's amazing to think back 20 years from now, from the first time we joined the grid together in an endurance sports car championship. I am very grateful that we are still connected and working together here at World eX.

‍So, when will we finally see you behind the wheel of an eX ZERO?

Well, I’m a typical racing driver, so I have lots of excuses. In this case, I’ve been moving and haven’t set up my home-rig, but I made a pledge that I’m going to be on the grid, at least practicing, but hopefully taking part in next year’s U.S. home race. It’s time for me to put it up and get into it. I look forward to it. I admit that I haven’t even had a single session sampling the car. So I need to change that and it starts with getting my rig built at home.