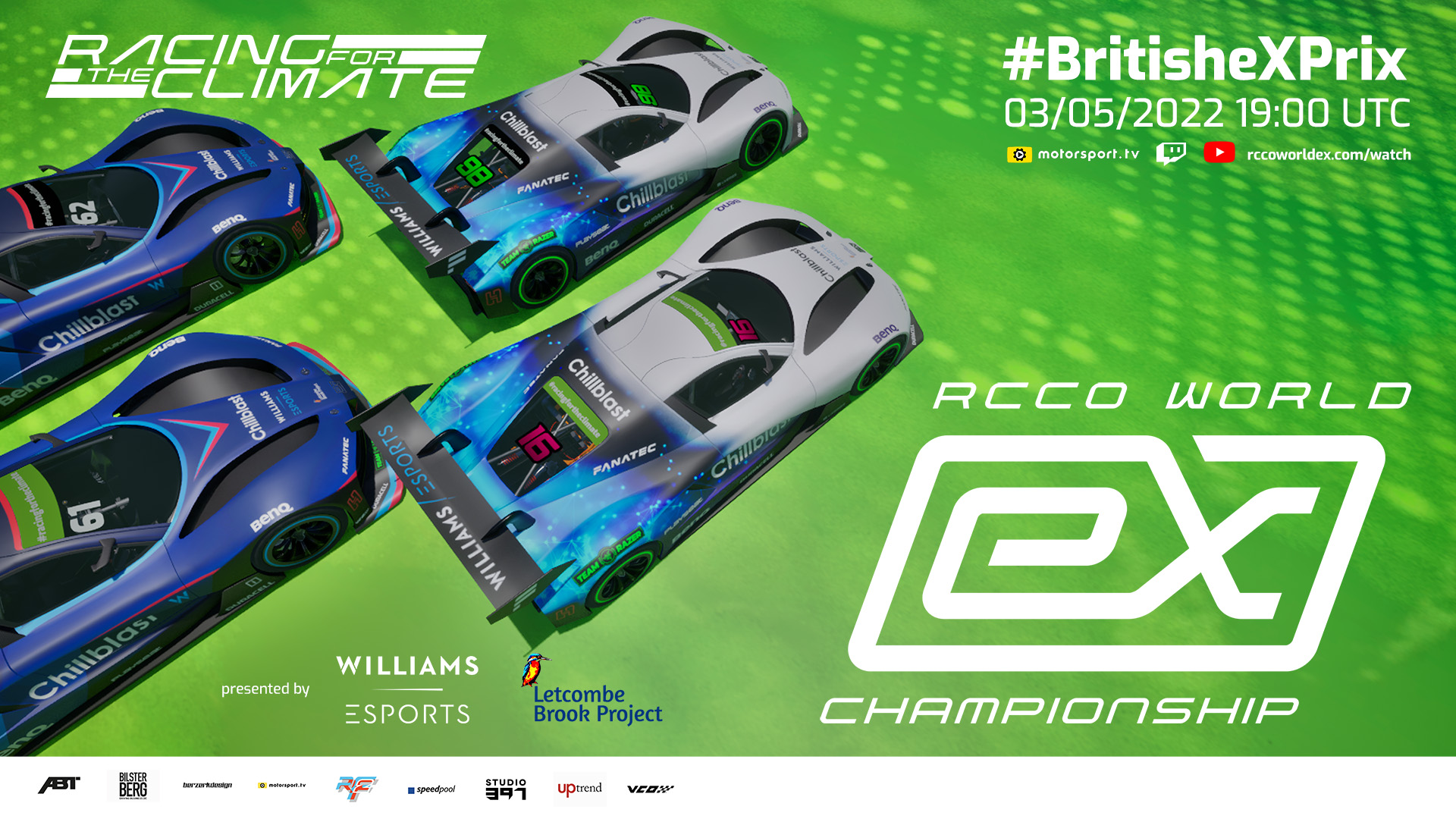 This Tuesday, Season 2 of World eX is finally getting underway with the eX Prix of Great Britain at Silverstone presented by Host Team Williams Esports. We can’t wait to see how the new race format will work. You will be able to watch the race action live on YouTube, motorsport.tv, Twitch and some of our drivers and teams.

After Round 1 of World eX Season 2 had to be postponed by one month due COIVD-19 cases in our RCCO organisation team, the eX Prix of Great Britain at Silverstone is finally going to happen this Tuesday (May 3). We are still #racingfortheclimate, highlighting the climate crisis and climate-protection projects, but we also want to deliver cool races. The race format for Season 2 is quite compact with Free Practice, Qualifying, two Quarter Finals, the Semi Final and the Final which will see the best PRO and the best ESPORTS racer fighting for the race win in a 2-lap sprint.

Not only the race format has been adapted together with our nine permanent World eX teams. The Championship format is new as well. Each team has entered one car in the PRO category for “real world” racing drivers like Patric Niederhauser, Henry Drury or Lasse Sørensen and one car in the ESPORTS category for esports racers. The drives will fight for the race wins, but the teams’ cars will qualify for the Super Final on the Nürburgring-Nordschleife on December 13, 2022. Every car reaching the Final of an eX Prix will get a ticket for the 2-lap shoot-out which will decide the 2022 World Championship.

We’ve asked our teams to give their cars nicknames this season and they’ve come up with some pretty funny names. Some of them we still need to understand, some of them are quite straight forward. Our team from China, Absolute Racing, just took the Chinese names for yellow and red, huáng chē and hóng chē – the Identifying colours of their two cars. Swiss “National Team” NIANCO opted for the names of two Swiss mountains, Säntis and Stögu. BS+COMPETION named their cars “ZEBRAkira” and “ZEBRAlen” while the No. 7 eX ZERO from last year’s eX Prix of Great Britain winner Lasse Sørensen has been named “Danish Dynamite” by TK9 E-SPeeD Team Principal Tom Kristensen. The “voice of World eX” Dave Richardson and World eX co-founder Mike Rockenfeller will definitely explain more about the background of the names during the #racingfortheclimate live show on Tuesday starting at 19:00 UTC on YouTube and motorsport.tv.

Stage 1 of the (Un)real Design Challenge has been started. The task: creating a special livery for our eX ZERO related to our motto #racingfortheclimate. The nine World eX teams will select the best three liveries and their creators will win tickets for the FUTURE MOVES summit at the famous OMR Festival in Hamburg on May 17, 2022 worth 499 Euros each including a Meet & Great with Audi factory driver and long-time RCCO friend Mattias Ekström.

World eX Team Principal and driver Nico Müller will miss Tuesday’s ex Prix of Great Britain after his original flight home from the DTM opener at Portimao in Portugal has been cancelled. Nico enjoyed his first pole position and his first victory in DTM since the series switched from Class 1 to GT3 machinery. Congratulations!

World eX co-founder Mike Rockenfeller was also at Portimao, working for the first time as an expert for German TV station ProSieben. “Rocky” will have this role in further DTM events this yearm and also in our World eX events.

Beitske Visser was the only permanent female driver in World eX in Season 1. This year, she will get some female competition as NIANCO esports has added Swiss “real world” pro racer Jasmin Preisig to their World eX roaster.

Formula E’s Gen 3 car was unveiled last Thursday on the eve of the eX Prix of Monaco. The new car is a big step from the Gen 2 car regarding in performance and includes a lot of new ideas to make create a more sustainable racing car. However, the look of the car is not everyone’s cup of tea. I also need to get used to it, so let’s call it “disruptive” for the moment.

GM has developed a patented heat pump that recovers energy from batteries’ waste heat to create heating for their electric vehicles. On the same day the company announced that it will be also launching electrified and fully electric versions of their famous Chevrolet Corvette sportscar.

The third edition of the Green Racing Virtual Summit is happening this Thursday (May 5). The event highlights innovations in motorsport to help the global industry reach NetZero in the coming years with the help of interesting panels and experts.

There are many clever ideas out there to reduce the impact mankind has on mother earth and our climate. mobilocard.com has created an eco-friendly form of company cards which will get rid of printed cards which very often end up in bins very quicky. Mobilo uses NFC chips and QR codes to deliver the contacts directly to smartphones.

VCO founder Florian Haasper was supposed to take part in World eX Bizz on Monday evening. Unfortunately, he is still recovering from an injury and germs that tied him to the sickbed. He was allowed to leave the hospital just before the this weekend. We wish Florian a speedy recovery and will catch up with him in the Bizz Talk as soon as he is fit again. His next chance in World eX Bizz comes on June 6 when we will run the finale of Season 3 on the famous city street circuit of Surfers Paradise.