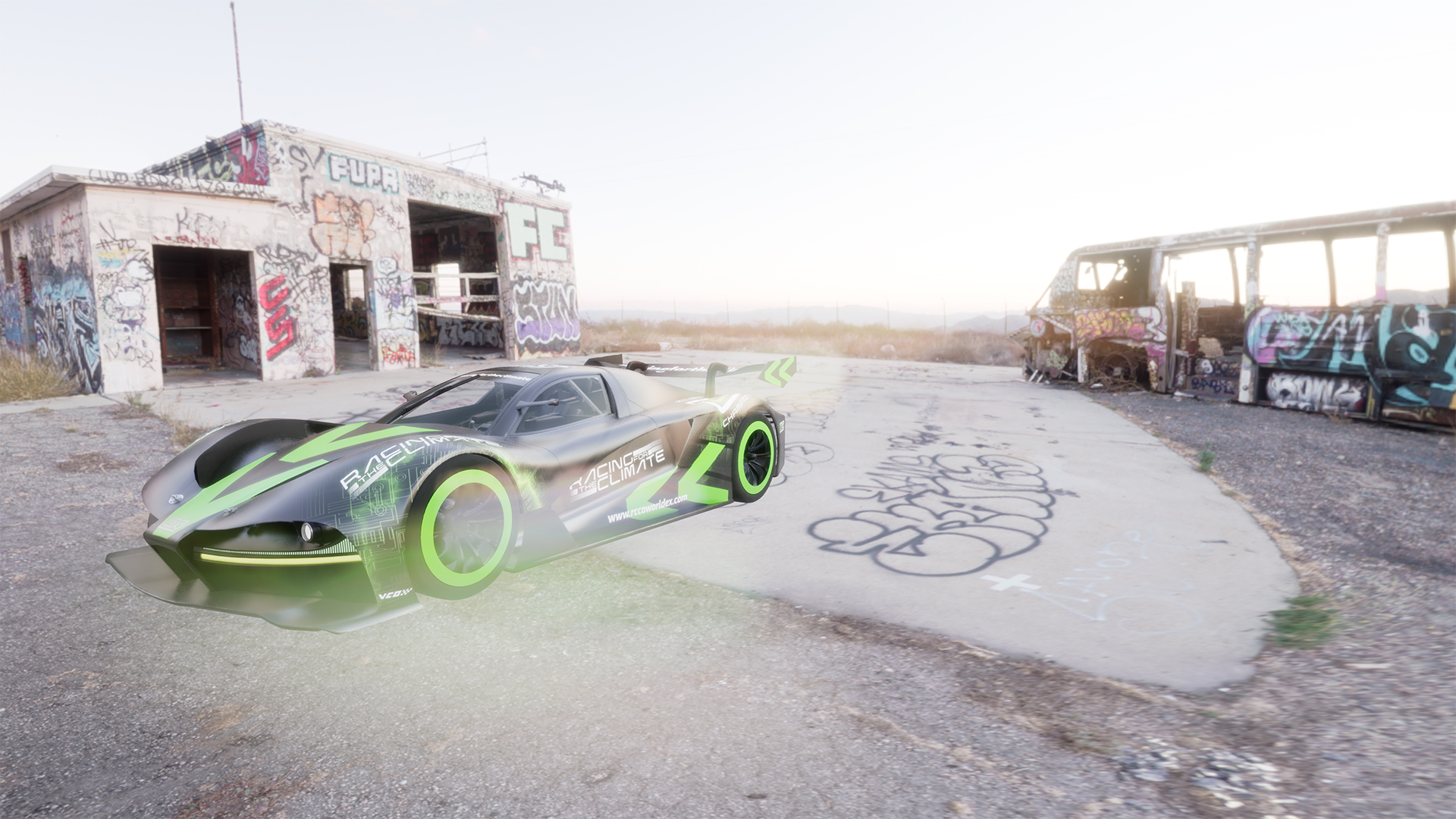 Last Friday has been Earth Day 2022. Social Media was full of it, and there are many great projects out there to reduce CO2 emissions. At the same time Russia keeps continuing the war against the Ukraine, which is a nightmare for humanity but also for our planet.

The war in the Ukraine is another proof of how ruthless mankind is treating our planet. Did you ever search for #lostplaces? Those places are another proof for it. It’s incredible how many abandoned buildings there are all around the world, some of them in the middle of mother nature. We’ve decided to send our all-electric eX ZERO on a virtual world tour, putting those structural faults into the spotlight.

While the countdown is running for Round 1 of the 2022 World eX Championship on May 3, we are launching Stage 1 of our (Un)real Design Challenge. In this first stage we are asking fans and designers to create special liveries for our eX ZERO related to climate preservation and CO2 reduction. The winners will get tickets for the FUTURE MOVES event at the 2022 OMR festival in Hamburg on May 17 including a Meet & Greet with Audi Sport driver Mattias Ekström who is a great ambassador for zero-emission mobility.

NIANCO esports Team Principal and World eX PRO racer Nico Müller had his first weekend as a Formula 1 expert for the Swiss Television at Imola this weekend. World eX co-founder Mike Rockenfeller has a similar role next week for German TV station ProSieben at the DTM opener at Portimão. Mike will be back in time from Portugal for Round 1 of World eX at Silverstone where he will be the co-commentator for Dave Richardson.

Do you remember Adrien Tambay? The son of former Ferrari Formula 1 star and Grand Prix winner Patrick Tambay was racing in DTM before being dropped by Audi. The Frenchman is back in business as a professional racing driver for CUPRA EKS in 2022 in the all-electric FIA ETCR eTouring Car World Cup. He will join Mattias Ekström, Jordi Gené and Tom Blomqvist.

The Gen 3 Formula E car will be unveiled next Thursday in Monaco. Formula E claims it will be the „world’s firs net-zero carbon and most efficient racing car“. En suite we are also expecting some announcements regarding new teams for Season 9.

While the Volkswagen Group is set to enter Formula 1 in 2026, the Stellantis Group is increasing its commitment in Formula E. Speaking to the-race.com, Stellantis CEO Carlos Tavares said he believes that Formula 1 and Formula E will likely cease to coexist in the future due to societal pressure for the eradication of ICE engines in favour of EV technology, as governments push through legislation to cease reliance on petrol and diesel engine designs. Formula E is said to have a 25-year electric single-seater contract which would prevent Formula 1 to go fully electric before 2039.

IndyCar choose Earth Day 2022 to announce their strategy to reduce the carbon footprint of the Indy 500 and the IndyCar series. The program includes the introduction of a Firestone alternate race tire later this year which is partially composed of a new sustainable natural rubber derived from the guayule shrub, which requires less re-harvesting than traditional sources of rubber.

Borne from a goal to build an electric car that consumes less than 10 kilowatt-hours of energy per 100 kilometers, the Mercedes-Benz Vision EQXX concept has achieved a stunning milestone driving 1,000 km from Sindelfingen to the South of France in a single charge consuming only 8.7 kWh per 100 kilometers. Mercedes says it wants quickly bring down the consumption of their electric cars from today‘s 20 kWh levels to 10 kWh.

Audi, BMW and Mercedes-Benz last week unveiled three new electric cars in the luxury class. The Audi urbansphere concept car has been created for use in traffic-dense Chinese megacities. The BMW i7 and the new Mercedes EQS SUV are built for everywhere. All three brands have been criticized in German media for taking the wrong route with those massive cars when the task is to reduce urban traffic and the CO2 footprint.

A group of “practical idealists” has created the electricityMap which shows in real-time which country is using which amount of clean energy. The team’s mission is to organise the world's electricity data to drive the transition towards a truly decarbonised electricity system.

VCO founder Florian Haasper will be the guest in our next World eX Bizz Talk in May 2 which is reserved for members of the Bizz Club. After the talk, World eX Bizz Round 4 will be two night races on the (virtual) track of Dubai. Andre Dietzel from Volkswagen Communications is currently leader of the networking esports racing series.